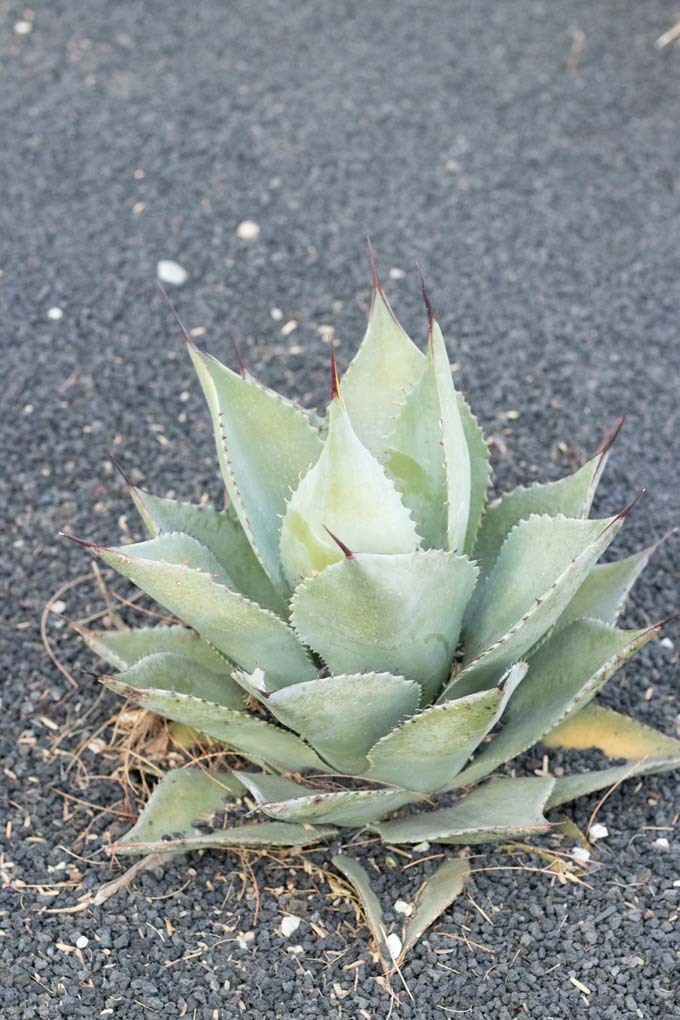 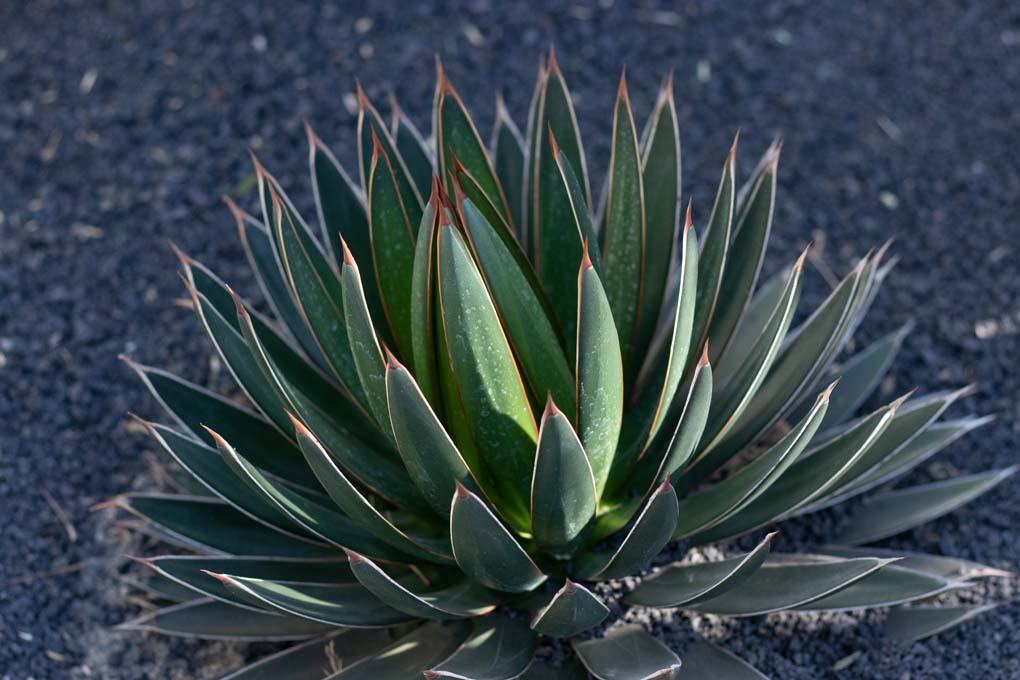 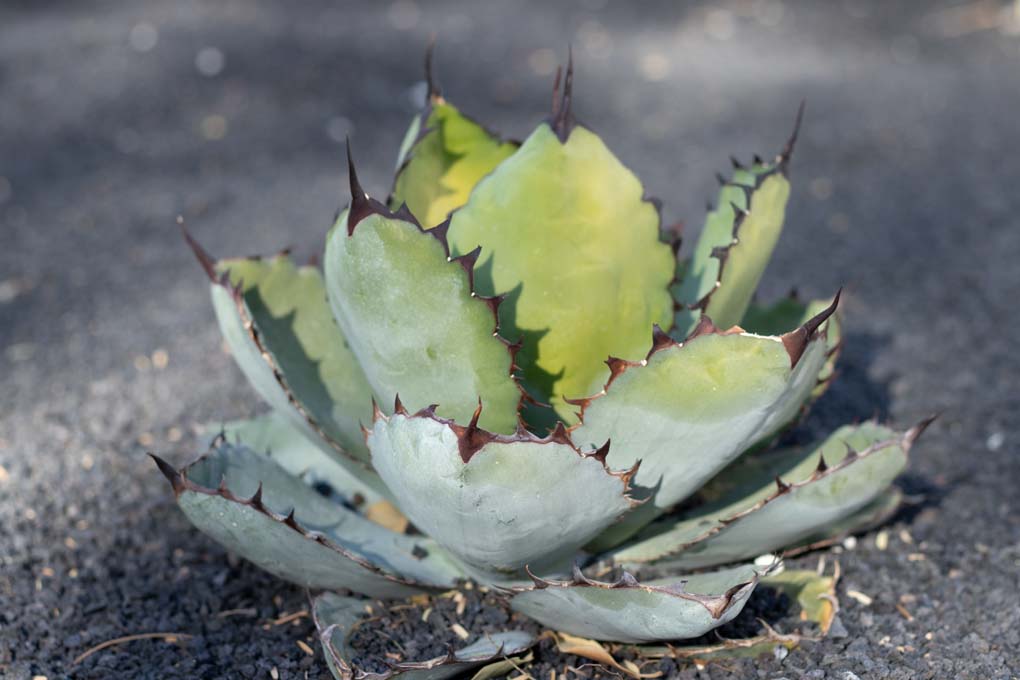 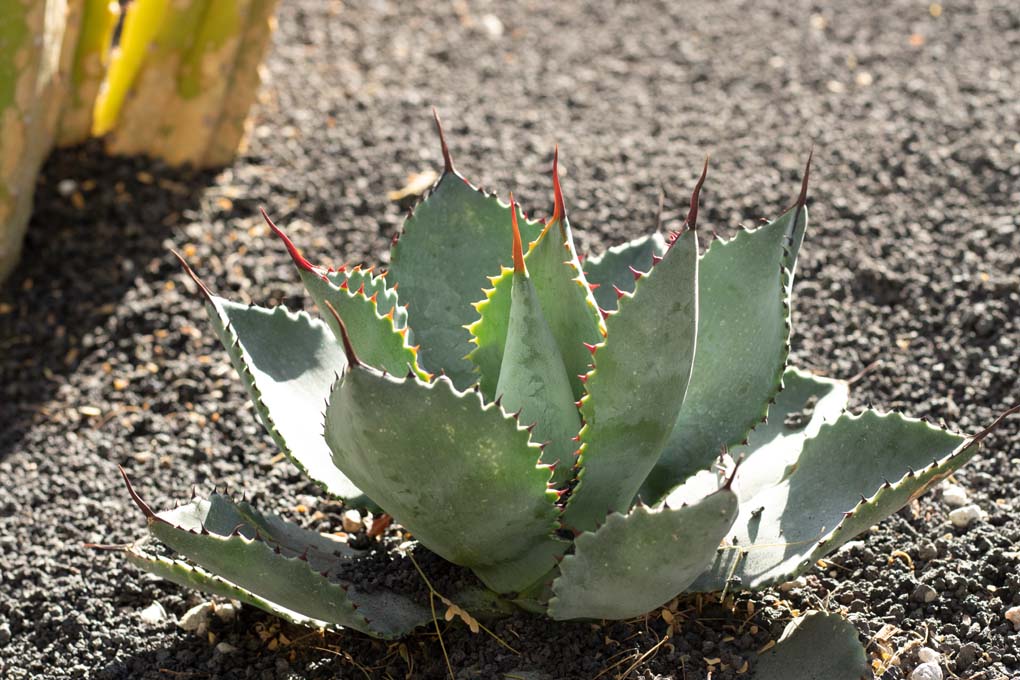 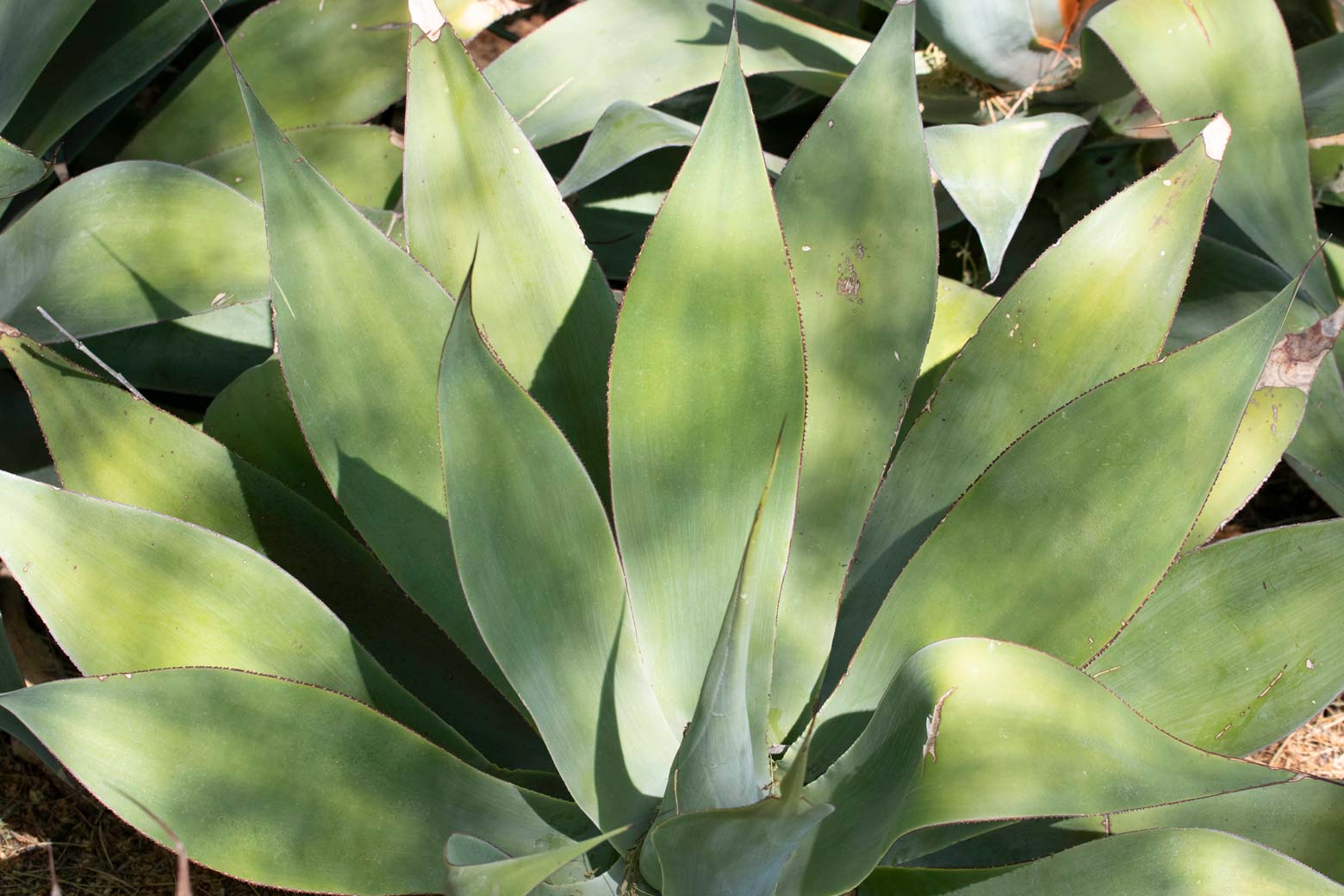 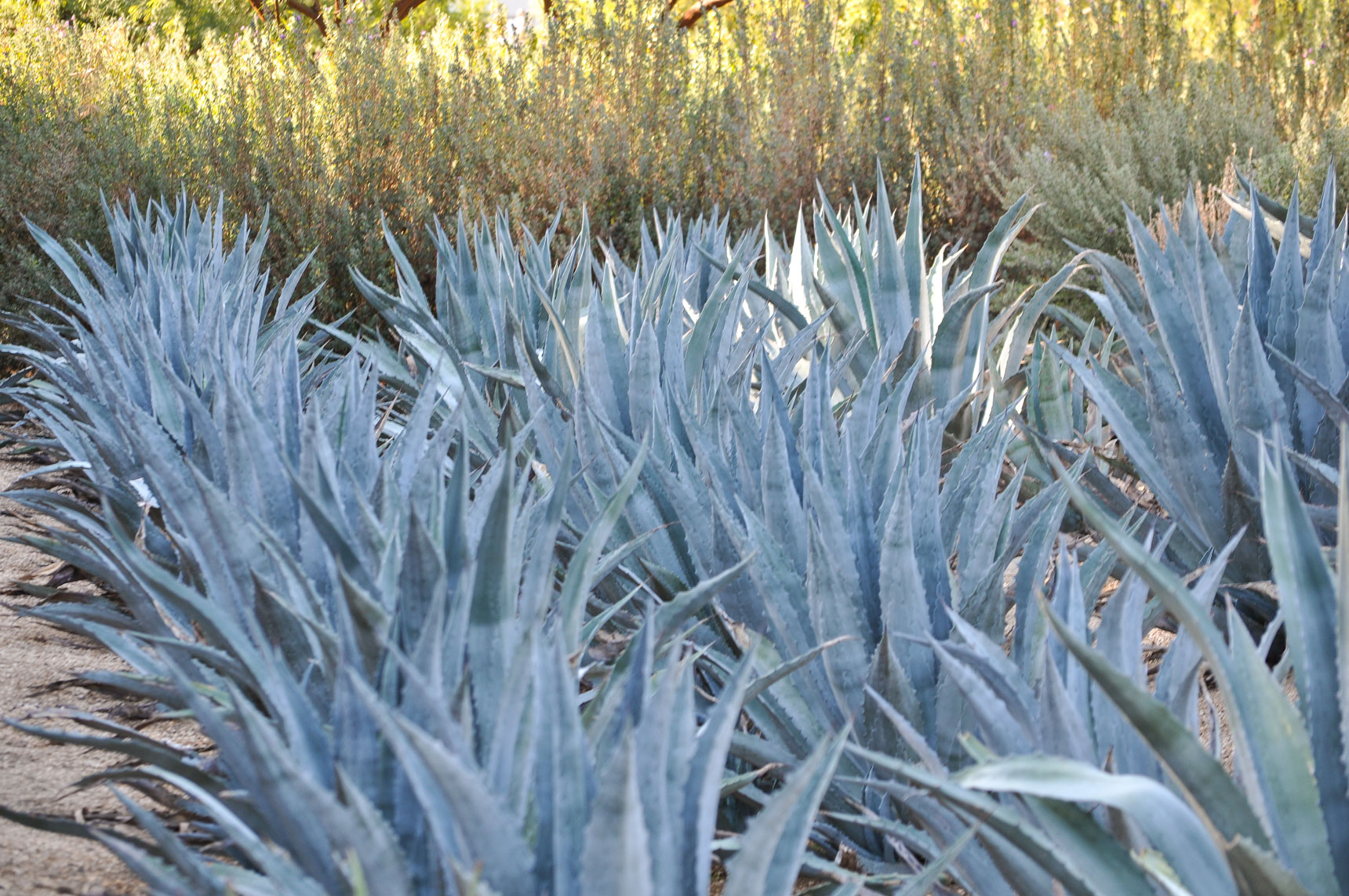 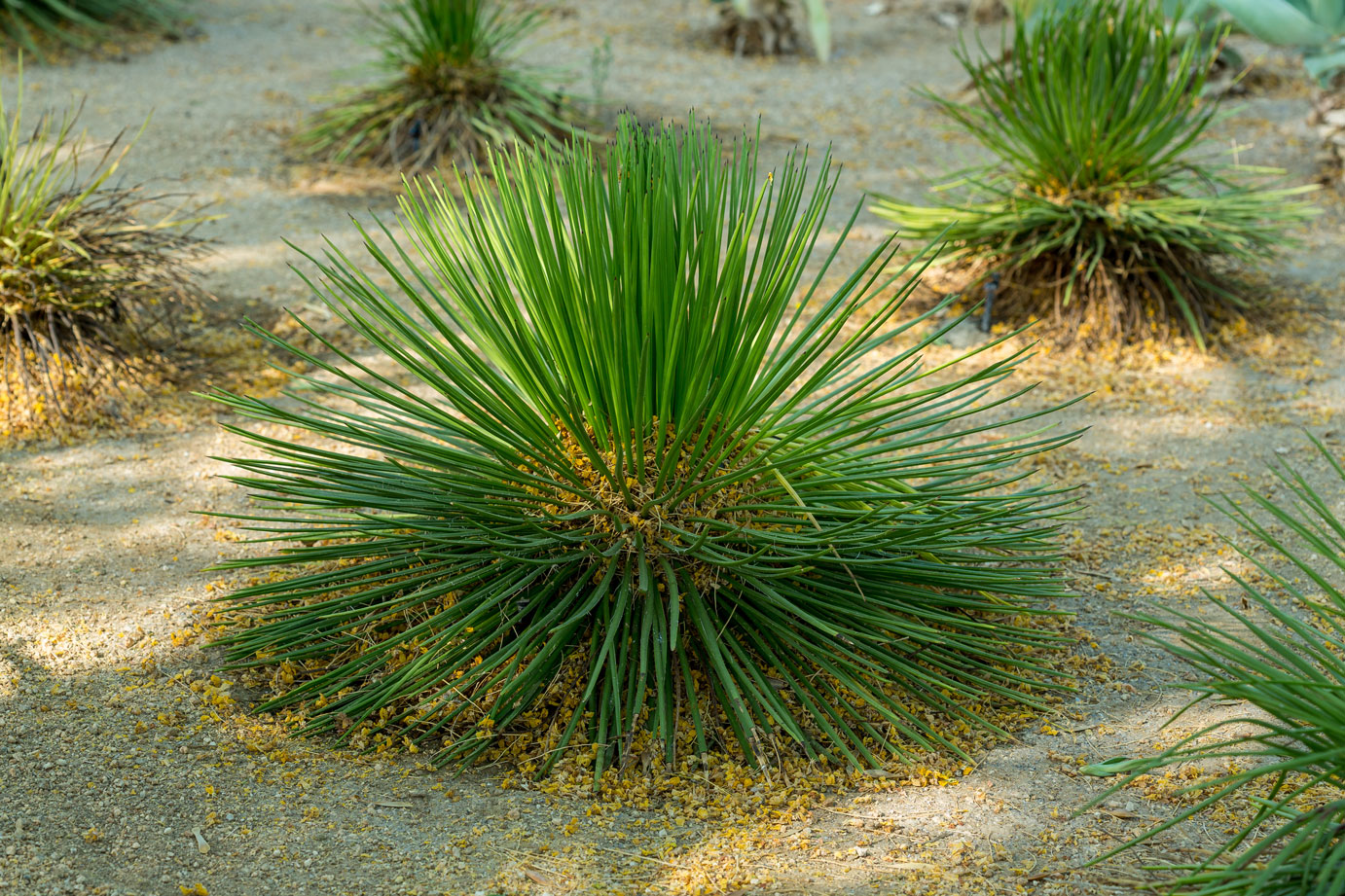 Another species that may not be immediately recognizable as an agave is the A. geminiflora. Having attributes including filaments along its margin, instead of teeth, may cause it to be confused with Hesperaloe, which has this similar feature. The leaves are very narrow and flexible. As it grows, a stem will begin to form below its rosette of 200 densely placed, and curved leaves.

The name Twin-flowered or geminiflora describes its paired flower display. Its blooms are yellow with a red flush that grow at the top of a spike that can rise up to 12 feet. This bloom will happen once at end of life. Offsets and bulbils are rare, so propagation is mostly by seed.

Its origin is the Mexican state of Nayarit, with its range at elevations between 3,000 to 4,000 feet. Very susceptible to cold, it needs protection from frost, even in the low desert, but in general can tolerate some shade. 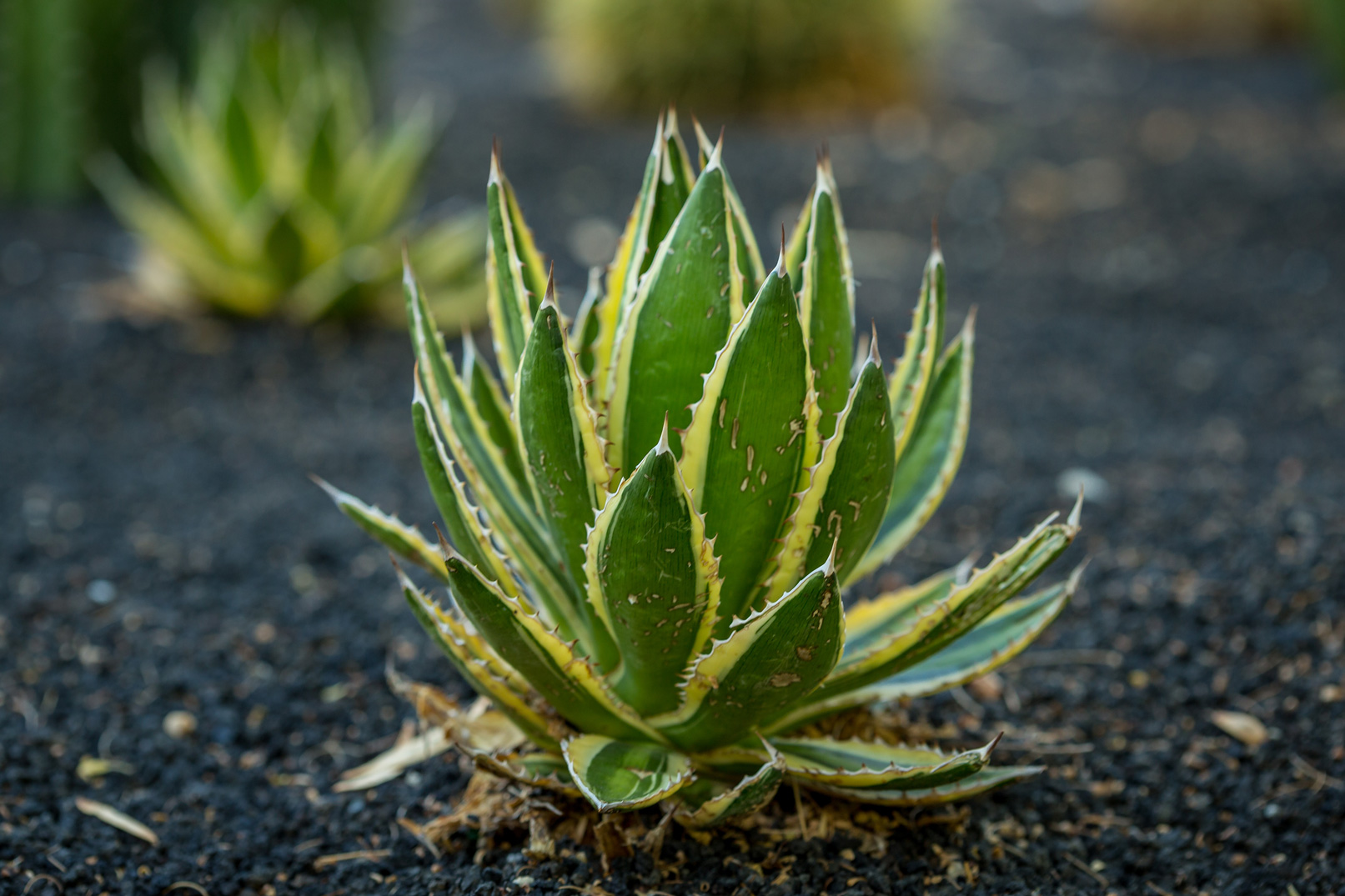 In two specimen beds at the south side of the Center, there are a few small, very decorative Thorn-crested Agave. Normally this variety grows to a maximum of about 2 feet, but there are many hybrids of various sizes and colors. The variety at Sunnylands is ‘quadricolor,’ meaning its leaves display four colors. There are three distinct shades of green striping on the leaves that are framed with red teeth along the margins.

When planted in full sun, you will see a pink blush. This is a process which is visible in other desert species as well. You may notice it particularly on succulents.  As part of the photosynthesis process, green chlorophyll in plants is the mechanism that captures light and converts it to food, but too much sunlight can also damage cells. Turning off some of those light receptors can protect plants. This pink blush is one photo-protective mechanism that reduces the plant cell damage from sun exposure. In the case of agaves, it has been attributed to the presence of Anthocyanins (flavonoid pigments) within the plant’s tissue. The exact process and triggers are still being explored. For aloes, the mechanism is due to the presence of rhodoxanthin (see Medicinal Aloe).

A native of the United States and Mexico, Thorn-crested Agave is found in the wild at elevation ranges between 100 and 5,000 feet.

At maturity, it sends up a 12-foot spike that forms yellow-green blooms. As an agave, it will bloom once at end of life. However, during its lifespan it will have also produced offsets, which are clones of itself, often referred to as pups. So in addition to propagation from flowering, the clones can be replanted as well. This species has not yet bloomed at Sunnylands. 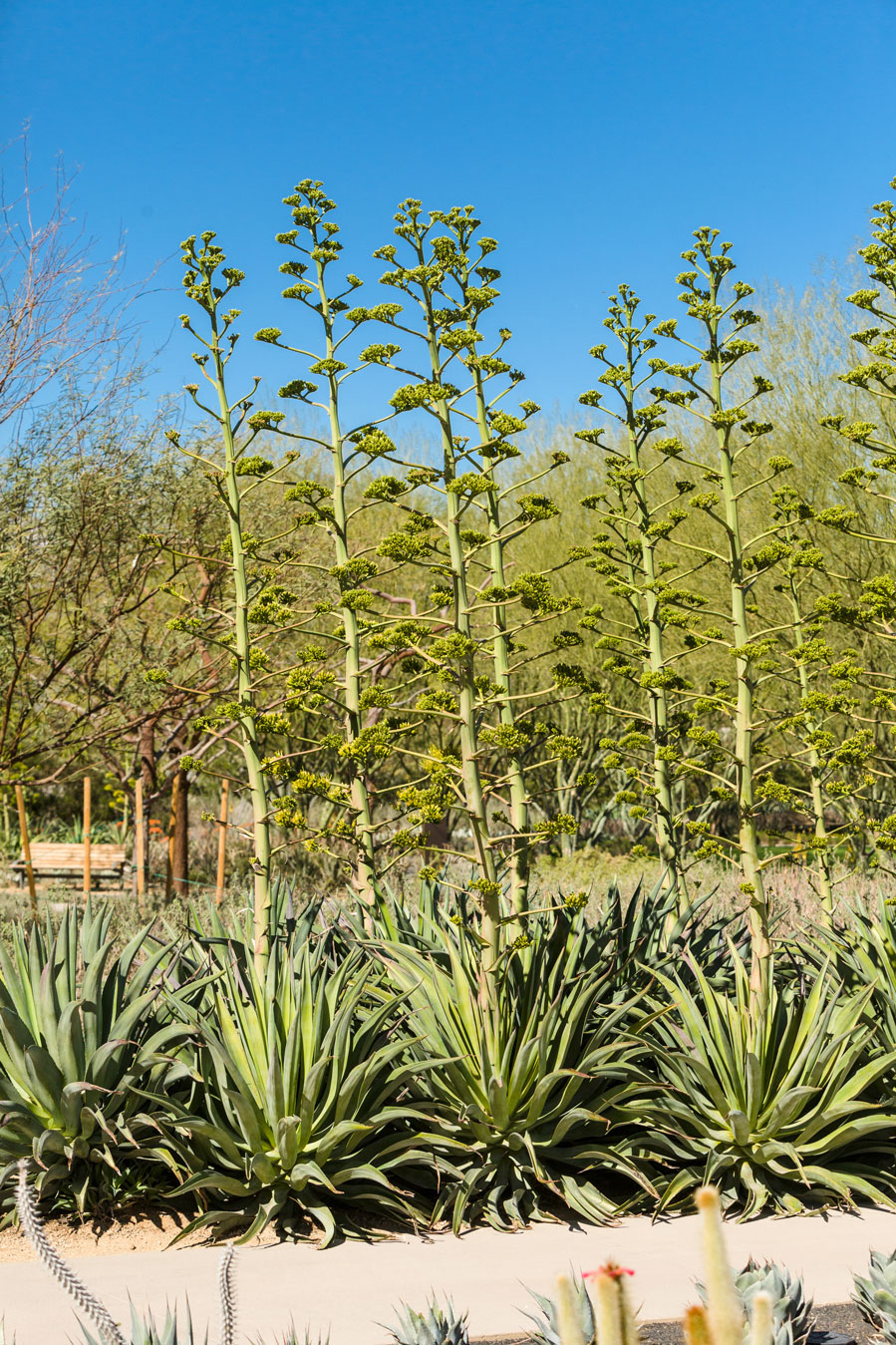 Some Smooth Agave began blooming within a season of their planting. In order to ensure that the Center & Gardens would look established on opening day in 2012, some more mature specimens were used. For the agaves, this meant they would be closer to blooming. The first specimen began to bloom in 2013 and additional ones have continued blooming each year since. This has offered visitors the opportunity to see blooms each season, which is great for the experience but results in the necessity of replacement of individual plants.

The Smooth Agave sends up a thick, branching stalk that blooms bright yellow and then forms bulbils (small, fully formed plants), which can be replanted. Smooth Agave does not exist in the wild but is common in cultivation and its offsets form early, so replanting is not difficult.

It has been found to be cold sensitive and die off of lower leaves immediately after a frost is possible. 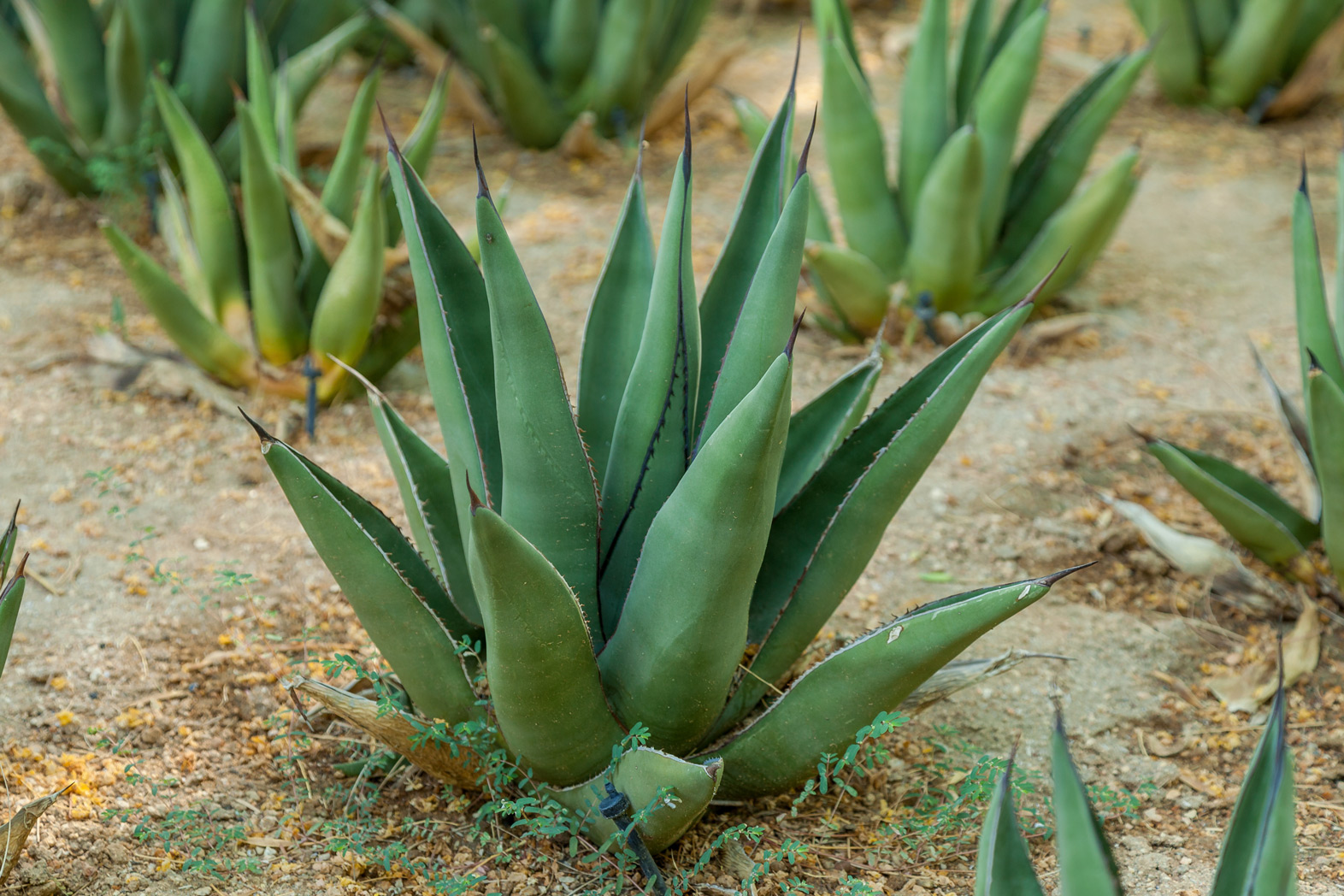 Not just a fun name, Sharkskin, with its thick, triangular leaves, is a visually appealing, and sturdy agave. Its name comes from the textural feel of its skin that resembles the feel of shark skin. Described as “stout” or “muscular” due the thickness of its leaf base, it maxes out at 3 feet in height. To some it may look like just another agave, but to those who look for slight variations among varieties, it is distinctive.

Sharkskin is pest resistant. It has proven to be a low maintenance selection at Sunnylands, and due to its lack of a finicky nature, so it does well throughout the gardens.

Its origin is Mexico as a hybrid of A. ferdinandi-regis form of A. victoriae-reginae. 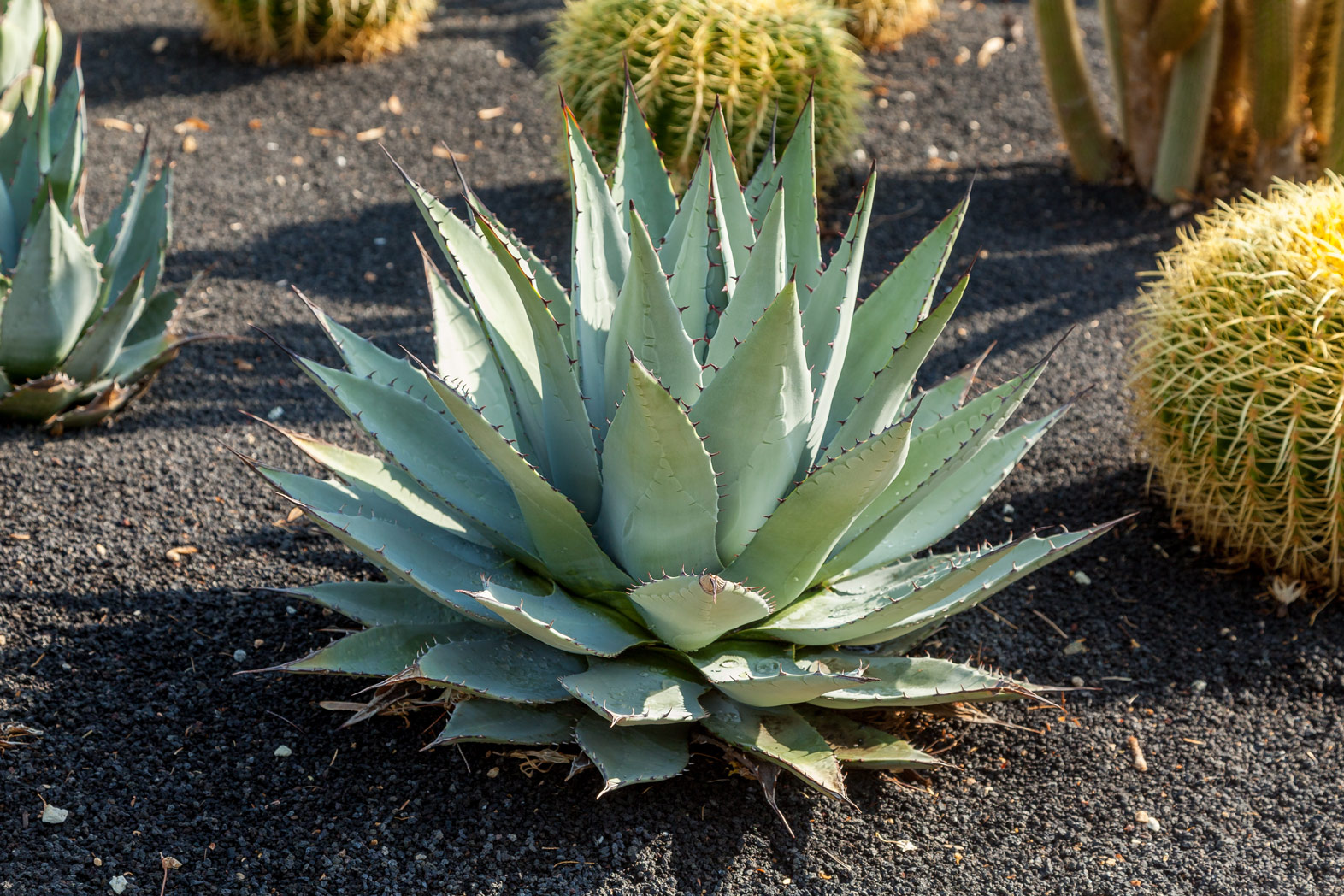 This is the description for Parry’s Agave, but there is also an Agave parryi var. ‘truncata.’ For this variety, please see Artichoke Agave.

The Parry’s Agave is a small, neatly designed variety with elliptical leaves arranged in a tight rosette. It is one of the more common agaves in the garden. It can colonize forming offsets around its base. So, in addition to seed collection, these clones can be collected, and at Sunnylands they are harvested for future specimen replacements. It is a perfect companion for wildflowers and perennials in desert gardens, but is equally successful in groupings of several Parry’s Agave. It is one of the most cultivated species for low-desert gardens.

Parry’s Agave grows an inflorescence (flowering stem) that may rise up to 20 feet, extending branches that will hold bright yellow flowers, touched with red or pink.

It’s origins include Arizona, New Mexico, and the Mexican states of Chihuahua and Durango at an elevation range between 1,500 and 8,000 feet, but it has done equally well on the desert floor. The vast range of this species allows it to thrive in many locations. 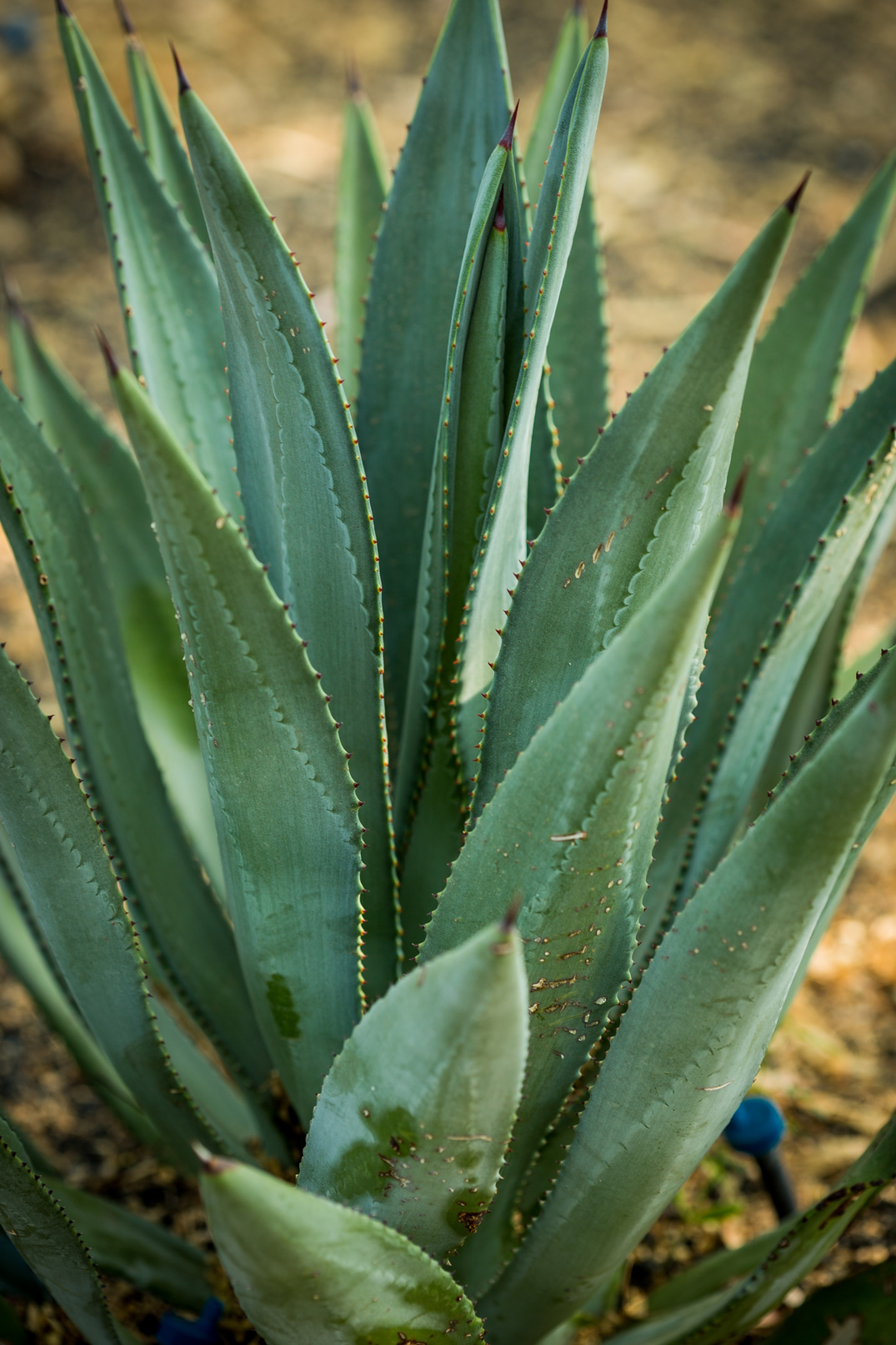 Murphy’s Agave was not included in the original design plan in 2012. It was brought in later as a test to replace the more frost-tender Smooth Agave in some of the shaded garden beds. Due to high temperatures in the Coachella Valley, it does well in these shaded sections, but in colder areas it will require full sun. At Sunnylands, you can find it north of the Center under Palo Brea trees. It shares the urn-like shape of the Smooth Agave, but having fewer offsets than the Smooth Agave it needs less maintenance to keep its urn-shape visible.

Its stalk can grow to 13 feet, displaying bright yellow blooms tipped with purple. It rarely sets seeds but does set bulbils after it blooms. These can be collected and replanted.

Murphy’s Agave is native to the rocky slopes of central Arizona at elevation ranges between 1,500 and 3,000 feet.