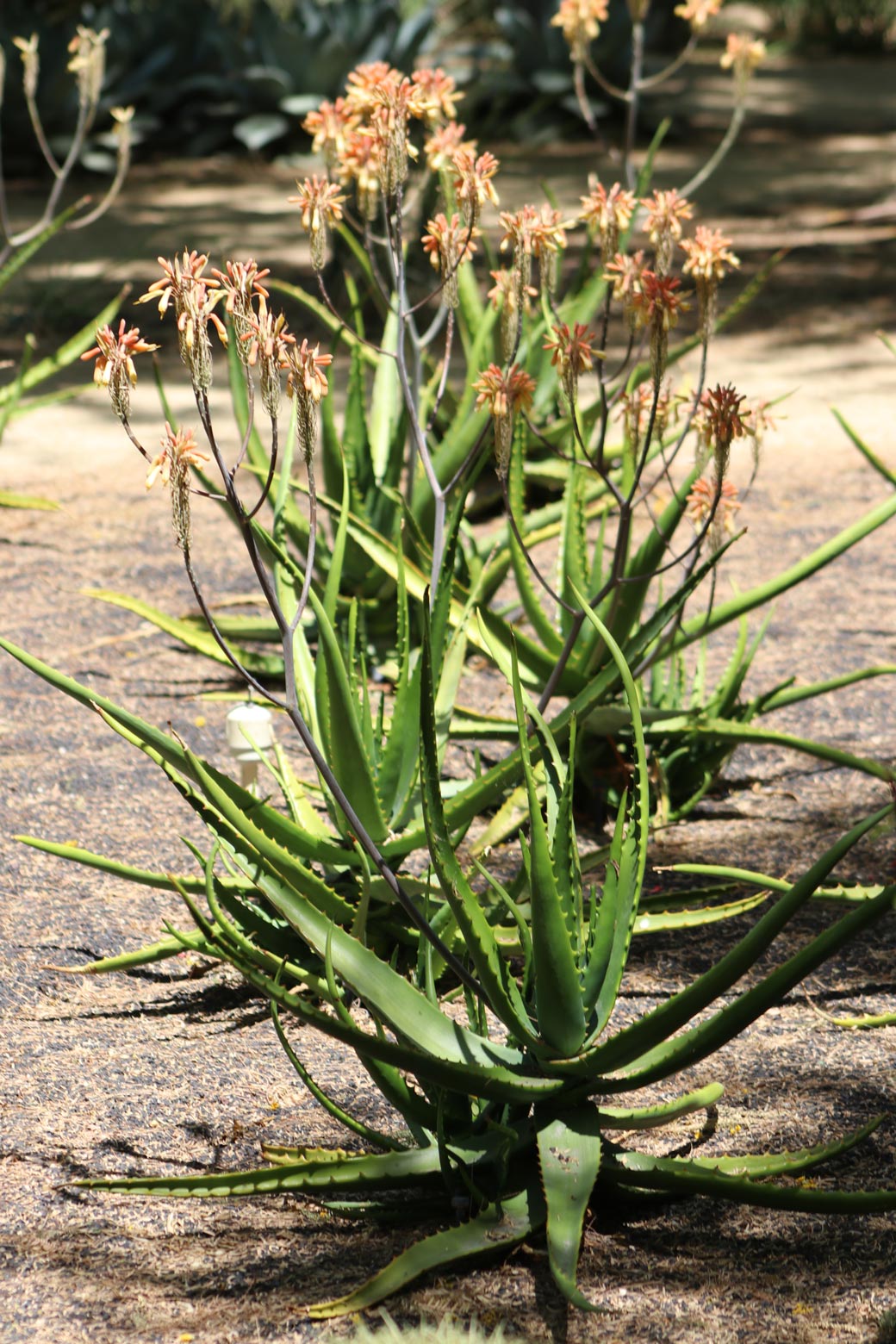 The Nubian Aloe is another new addition to the gardens. It was added in 2016 to the northwest corner (the corner behind the Great Lawn closest to the solar field). Its leaves display a brighter green than other aloes in the garden.

Starting in January and continuing through the spring, blooms appear on a muti-branching stalk in colors closer to peach and apricot, not the reds and yellows of other aloes at Sunnylands. Like the Ghost Aloe, Nubian’s blooms appear bundled in clusters at the end of each branch. The blooms are a combination of yellow and peach tones, providing a softer appearance than other, more vibrant aloe cousins.

Nubian Aloe is indigenous to Ethiopia and Eritrea in Africa. 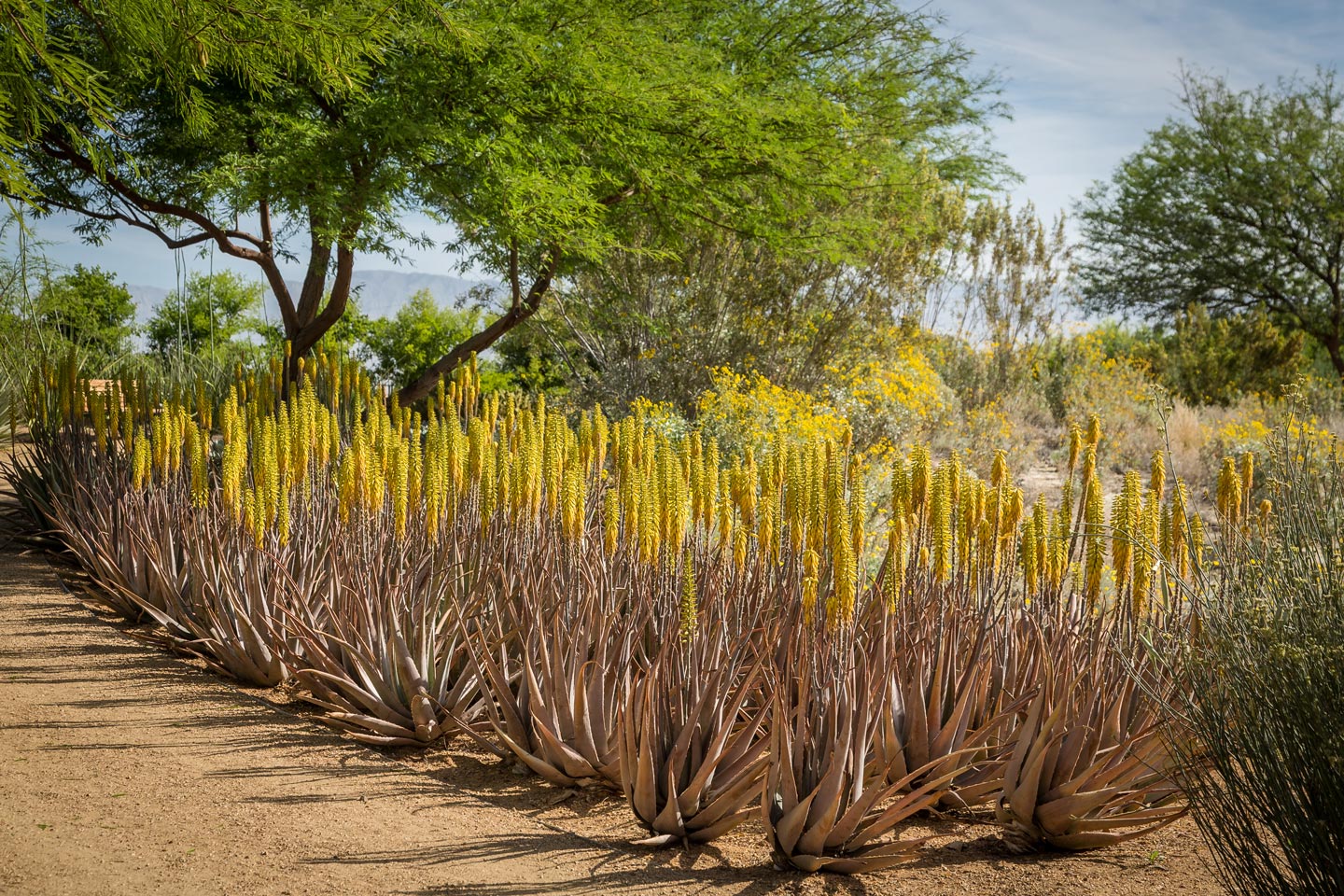 Groupings of Medicinal Aloes completely fill their planting beds throughout the gardens as they rapidly produce pups at their base. Growing to heights of 3 feet, their formal structure is effective as both an eye-catching backdrop for some smaller specimens and a front-and-center showstopper along other garden paths.

Medicinal Aloe is particularly striking from January through spring when it blooms in mass. Tall bayonets of yellow flowers create a frenzy of pollinator competition as bees and hummingbirds dodge each other to visit each bloom. The bloom stalks remain in place until all have completed their full cycle through seed setting—communicating that while the Sunnylands garden is an aesthetic garden, laid out with an artistic intent, it also embraces the natural process that allows each plant to complete its cycle.

The origin of Medicinal Aloe is the Arabian Peninsula, but today it is widely propagated around the world for both its aesthetic and medical qualities. 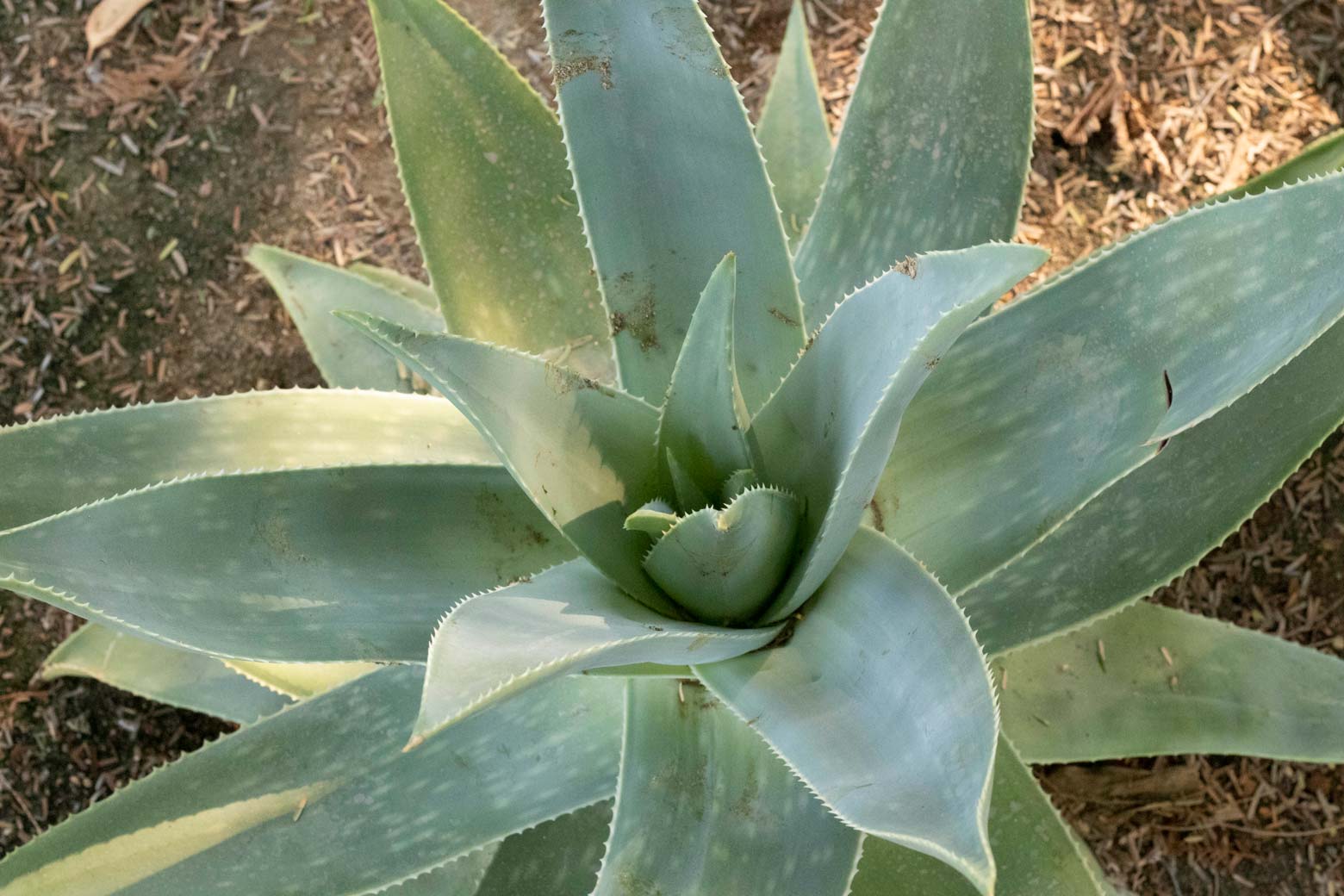 The Ghost Aloe is not a plant from the original landscape plan completed when Sunnylands opened in 2012, but its parent, the Coral Aloe is. Ghost Aloe is a smaller version of  Coral Aloe with a tighter rosette. It’s less casual in its structure and has a frosty coloration that gives it the ethereal common name of Ghost.

The blooming structure of this Aloe is not a bayonet appearance like the Medicinal Aloe. It, like Coral Aloe, has a multi-branching stalk topped with a candelabra-type gathering of orange-red flower blooms. 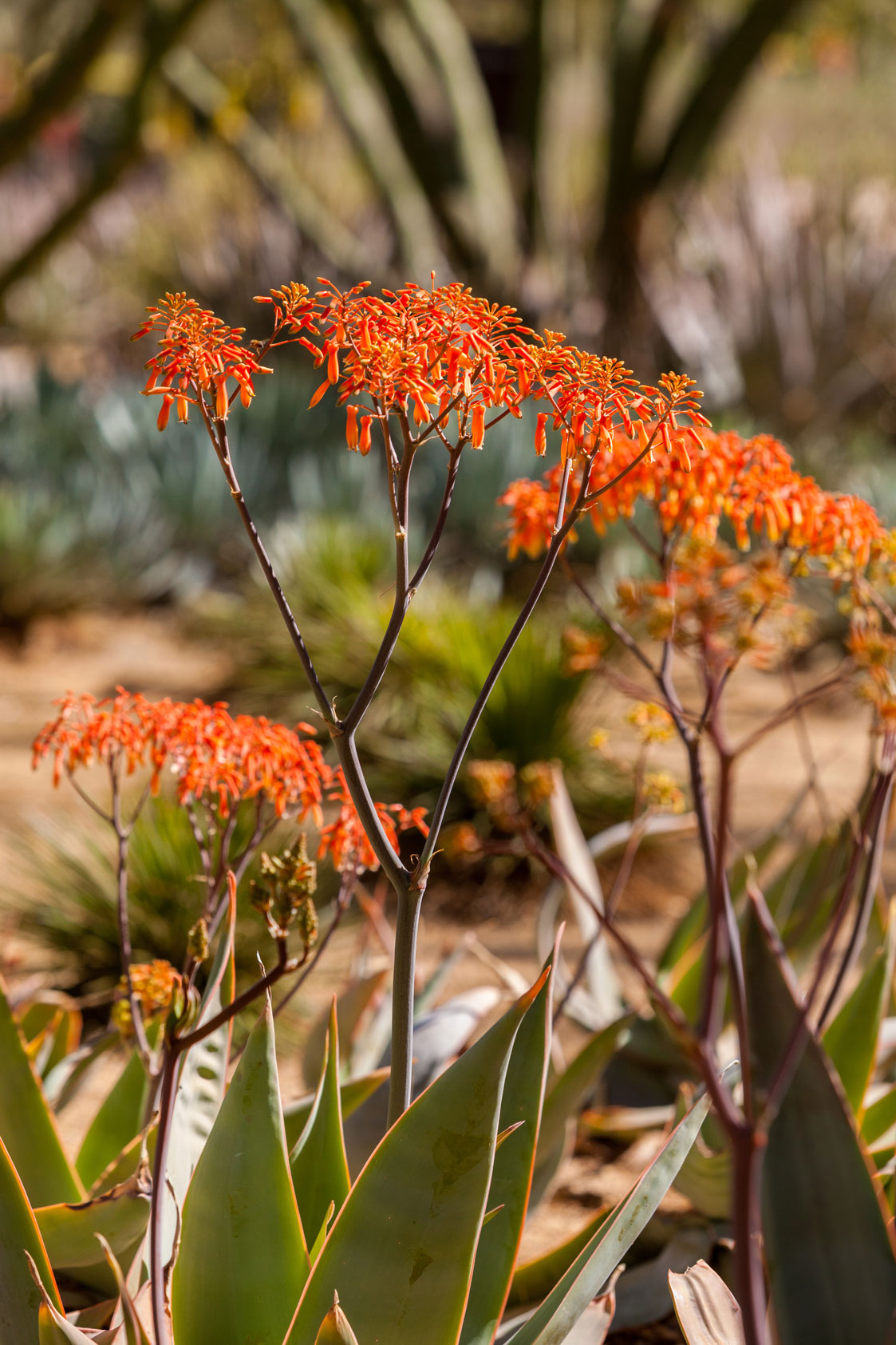 Coral Aloe is in the shaded garden beds outside of the path that surrounds the Great Lawn. Its appearance is an interesting contrast to the more formal structure of the Medicinal Aloe. Its wide and flat leaves are greenish-blue with a light pink margin (edge), but unlike the upward reaching leaves of the Medicinal Aloe, its relaxed leaves appear to flop open as it bathes in the dappled light under the Palo Verde trees.

Like other aloes, it blooms annually starting in January and continues through spring. The flower stalk differs from Medicinal Aloe and Blue Elf. Where they grow a single stalk in the shape of a bayonet, this multi-branching species has blooms that spread wide, like a tree canopy. The flowers are bright red-orange with a creamy-white tip. After the bloom, it sets seedpods that resemble green grapes. Like some other succulents, Coral Aloe will form clones or pups around the base, which can be collected and replanted.

The origin of Coral Aloe is the Cape Provinces of Africa, where it prefers the driest areas and elevations ranges of 800 to 7,300 feet. 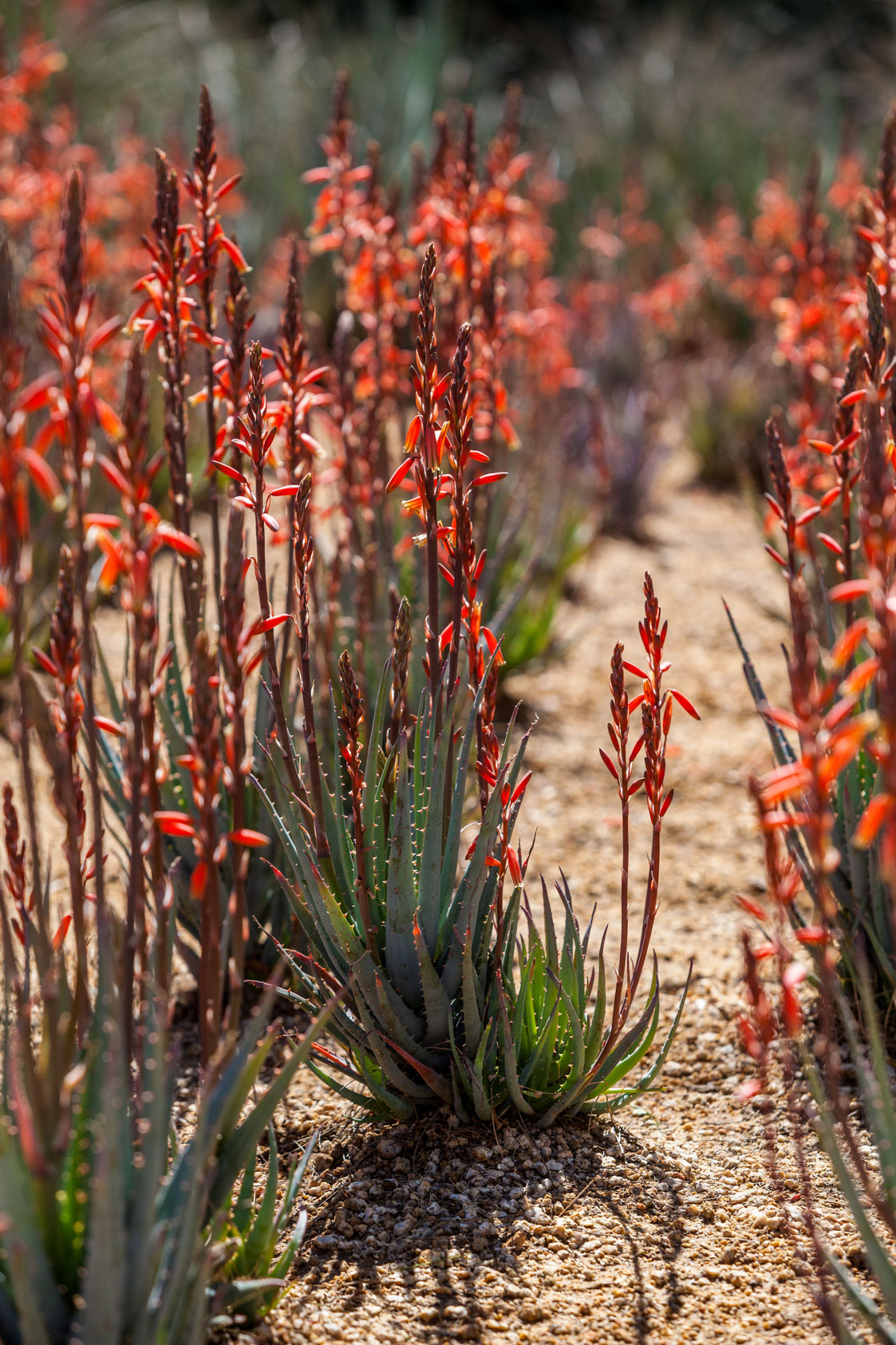 Blue Elf is a small but mighty succulent that can withstand the sun’s full attention on the hot desert floor. The smallest of the aloes at Sunnylands, its clumping nature allows it to spread readily to 2 feet. Visitors will first experience Blue Elf when walking to the front of the Center. It’s found growing in four beds below the Sweet Acacia trees that frame the entrance and anchor the entry circle. It is also on the west side of the gardens where it replaced the less successful Angelita Daisy (Tetraneuris acaulis) from the original 2012 landscape plan. It has proven to be a true powerhouse in the gardens.

The leaves of the aloe sometimes display a pink blush. This is the result of a protection mechanism that helps prevent plant cell sun damage. This response is linked to the storage of the pigment rhodoxanthin in the cells of aloes and can be triggered by environmental stressors, such as low water, but it’s usually seen on plants in full sunlight, which is the other environmental trigger. Planting in shade can reduce the blush, but too much shade may also inhibit its blooms.

Blooming begins annually in January and continues in mass through spring, but other times of the year a single aloe may send up a rogue flower stalk catching visitors’ full attention. Its flower stalk will top out at only 18 inches, displaying red-orange tubular flowers that are the delight of hummingbirds. This easy to grow plant has proven to be most popular with the dozens of Costa’s and Anna’s Hummingbirds that inhabit the gardens.

Reported in North Africa in the Canary and Cape Verde Islands.